Achieving fusion, and what next for First Light?

Having attained the major milestone of achieving fusion with its novel projectile-based technology, First Light Fusion is now looking to the next key steps, including a “gain” demonstrator, with more energy out than in, and design of a pilot power plant. First Light is pursuing a unique approach to inertial fusion, in which deuterium-tritium fuel inside a target is compressed using a projectile travelling at tremendous speed, creating the temperatures and densities needed for fusion. First Light believes its technology promises the simplest, fastest and cheapest route to commercial fusion power

High fives, popping of corks, confetti cannons... None of these things happened at the end of 2021 when we saw neutrons – evidence that we had achieved fusion for the first time. Though we are proud to have an action-oriented, entrepreneurial and energetic culture at First Light, we are all scientists and engineers; rigour is one of our company values. Any result needs to be challenged, forensically tested and, in the case of our fusion result, independently verified by the UK Atomic Energy Authority, which took us until April.

But that all said, we’re not robots either, there were definitely some fist pumps along the way! I would be lying if I said we didn’t collectively feel a huge sense of achievement, satisfaction and excitement at both the result and also what this means for First Light Fusion and indeed the fusion sector generally.

After achieving fusion for the first time, we have been asked: how did you know? what were you looking for? The answer is that we were looking for little blips on the oscilloscope. The blips needed to be at the right time, within a few billionths of a second, of the right shape, and most crucially, we needed to see them on more than one detector. For the first shot, it was there on one detector only, and the same on the second. But excitement built cautiously. In the end we ticked every objective for the measurement, and the confidence these are neutrons is eight-sigma, less than a trillionth of a percent chance of a false positive.

For readers who aren’t aware, First Light Fusion (a University of Oxford spin-out) is a privately-owned business researching power generation by inertial confinement fusion. I founded First Light in June 2011 alongside Professor Yiannis Ventikos, the head of the Mechanical Engineering Department at University College, London.

Our mission is to solve the problem of fusion power with the simplest machine possible. “Simple” is the key word here and one I will repeat throughout this piece. Fusion science is incredibly complex, as is the engineering that goes towards turning it into a power generation technology. With complexity comes delay and major expense.

We firmly believe we can crack fusion energy, but we also believe that for it to be sustainable, it needs to be cost competitive. Hence our insistence on making sure everything we do is as simple as it can be, preferably using tried and tested technology where it exists, but also ensuring that we have the end point in sight at all times. Society won’t accept clean power at any cost, the objective is net zero but also to end energy poverty. For fusion energy to be a major contributor in tackling climate change it must deliver electricity at a price people can pay.

This is reflected specifically in our unique approach to trying to solve this great scientific problem.

Our approach, a form of inertial confinement fusion, creates the extreme temperatures and pressures required to achieve ‘fusion’ by compressing a target containing fusion fuel using a projectile travelling at a tremendous speed. The projectile approach is lower-cost, simpler, and more energy-efficient than the complex lasers or magnets used by others, and it has lower physics risk.

It also has a simple geometry. We use one projectile coming from one side. This simple geometry opens up different engineering solutions that allow us to avoid the biggest engineering challenges of fusion power, which are: managing the intense heat flux; preventing neutron damage to structural materials; and producing the required tritium fuel.

The key technology in our approach is the target design, which focuses the energy of the projectile, a bit like how a lens focuses light. Although the outside system is different, the imploding fuel is identical to that of the laser-driven approach. The core physics is the same, but we have a new way or realising it.

Inertial fusion is envisaged as a pulsed process, like an internal combustion engine. The main existing approach to inertial fusion uses a large laser as the “spark plug”, triggering the reaction, we use a high velocity projectile instead.

Towards a pilot plant

In our planned future fusion power plant, the fusion energy will be absorbed by liquid lithium, flowing like a big shower inside the reaction chamber. The flowing liquid protects the chamber from the huge energy release, sidestepping two of the key challenges mentioned above, and heats up in the process. The specific choice of lithium will also allow the production of tritium, and can use the natural isotope mix, for which an established supply chain already exists.

A heat exchanger transfers the heat of the lithium to water, generating steam that turns a turbine and produces electricity. We might be producing heat in a way that has never been done before, but we will still use tried and tested 150 year old steam turbine technology to convert that heat into electricity. Why? Because it works, and it will allow us to progress far more quickly towards a commercial fusion plant.

As a commercial proposition, our sophisticated target designs will enable us to pursue a high value-added consumables business model, where we will partner with power plant builders and operators and become the fuel provider in the form of the targets. We believe this is the fastest way to scale our technology, the rest of the plant is simple enough to be built by others. Fusion science has to move forward, away from simply experiments to “real life.”

We currently have two machines to develop our approach – the first is called “Machine 3” (guess how many predecessors it had), the largest pulsed power facility in Europe. Using extreme electromagnetic forces, it is primarily employed to launch projectiles at the hypervelocity required to test our fusion targets.

The second is our two-stage hyper-velocity gas gun, the Big Friendly Gun, or BFG. This gas gun, the largest of its kind in the UK, at 22 m long, weighing 25 000 kg, fires a 100 g projectile at a velocity of 6.5 km/s or 14 500 mph (about 20 times the speed of sound) into the target. It was in fact with the BFG that we achieved our maiden fusion results at the end of last year.

We are often asked “what next”, as if by announcing our fusion result we had somehow finished our mission. But the opposite is true. The achievement of fusion was simply a milestone, albeit it an important one, in our longer-term journey. For us, it is proof our concept works. Of course, our simulations told us it would, and we were always very confident, but we still had to prove it.

But now the fun really starts. Though huge effort has been dedicated towards achieving this milestone, we have always had the bigger picture front of mind. The fusion result simply gives us greater confidence to accelerate towards our next objectives – these are “gain” (getting more energy out than in) and of course, working on the pilot power plant. And we won’t pack up Machine 3 or the BFG, we’ll keep improving the targets and finding more performance.

Plans for our gain demonstrator are well advanced and with a fair wind, we think it is a 4-5 year programme to build it. This will require a big new piece of kit of course, Machine 4, but we know exactly what we need, how long it will take, the design and the cost. Again, this comes down to the confidence in our technology and the relative simplicity of our approach.

In parallel with gain, we will start setting up relationships with established industry players and regulators to produce detailed, licenced design plans for a pilot power plant, while also working to de-risk critical supporting technology.

We are working towards a pilot plant in the 2030s with an installed capacity of about 150 MWe and costing less than $1 billion. We have recently announced a long-term partnership with Spanish engineering company IDOM to support the development of our fusion reaction chamber. IDOM will work closely with our team to scope the design and provide detailed analysis and options for the liquid lithium system and the reaction chamber.

The urgency of our work has increased, not slowed, after demonstration of fusion. Russia’s invasion of Ukraine and the spiralling cost of energy has only added new focus on our mission. Fusion, sadly, can’t help the current crisis, but it can have a material impact in the future. It’s vital to get this right and with the support of our people but also industry partners, we believe we can do it.

We take a totally unique approach to fusion technology, different from any other private company or government-backed fusion scheme. Our approach is a new method of inertial confinement fusion. We are able to recreate the established process for inertial fusion, the same implosion of the fuel pellet, with a simpler, lower-cost, scalable method. We impact an intricately designed and engineered object, our target, which contains fusion fuel, with a high-velocity projectile.

We successfully demonstrated this method, creating fusion, in April 2022, something we achieved for less than £45 million, and with a rate of performance improvement faster than any other fusion scheme in history. 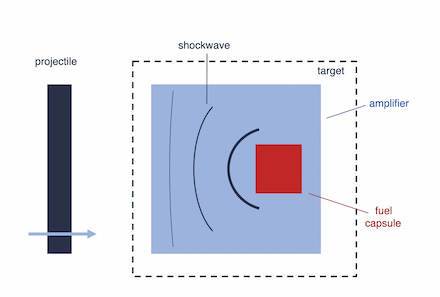 The target design is the key to our approach and our targets are completely proprietary. They are formed of two parts – the amplifier and the fuel capsule. The amplifier focuses and amplifies the velocity of the shockwave generated by the projectile at the point of impact and delivers this amplified pressure to the fuel capsule. One of the designs we used to show fusion takes the 6.5 km/s projectile velocity, and boosts that to a fuel capsule implosion velocity of 80 km/s. This level of amplification has never been previously achieved, and this is the first time fusion has been demonstrated in this way.