Chile has aspirations to become a major player in the hydrogen economy, and is well placed to be an exporter of cheap green hydrogen thanks to its enviable potential for renewable energy development 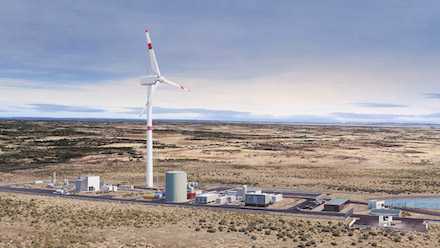 Above: The Haru Oni site

With some of the best solar and wind resources in the world, Chile features among the most promising countries to develop competitive green hydrogen and has set itself ambitious targets as part of its National Green Hydrogen Strategy. It plans an electrolyser capacity of 5 GW by 2025, rising to 25 GW by 2030. The goal is to produce the world’s cheapest hydrogen and develop the country into a leading exporter of green hydrogen and its derivatives.

One early green ‘lighthouse’ hydrogen project planning take advantage of the perfect climatic conditions for wind energy in the Magallanes region of southern Chile is Haru Oni, a collaboration between Porsche, HIF (Highly Innovative Fuels) and Siemens Energy, together with Enel, ExxonMobil, Gasco and ENAP.

The aim is to produce CO2-neutral fuel (eFuel) using wind power, with a pilot plant, located north of Punta Arenas, to be in operation in 2022. Production capacity will subsequently be expanded in two stages to around 55 million litres/y by 2024 and to around 550 million litres/y by 2026. Siemens Energy describes the Haru Oni facility as “the world’s first integrated and commercial large-scale plant for producing synthetic, climate-neutral fuels.”

Wind power is used to operate electrolysers, which produce O2 and green H2. CO2 is extracted from the air (via direct air capture (DAC)) and combined with the green H2 to produce synthetic methanol, which in turn is converted into eFuel.

Meanwhile, Total Eren’s large scale green hydrogen project in the Magallanes region, to be located in the commune of San Gregorio, has taken another step forward with the appointment of Wood to provide conceptual engineering.

Total Eren’s H2 Magallanes project envisages development of a complete off-grid integrated energy complex producing ammonia from green hydrogen, with 10 GW of wind installed capacity, coupled with up to 8 GW of electrolysis capacity, a desalination plant, an ammonia plant, power transmission and backup, and port facilities to transport the green ammonia to national and international markets. As well as having the best onshore wind conditions in the world, the Magallanes region also has direct access to the sea.

In November 2021, Total Eren signed a collaboration agreement relating to the project with the University of Magallanes (UMAG). Wood’s conceptual engineering will provide a basis for Total Eren and UMAG to deliver more precise environmental impact assessments and risk analyses, in accordance with standards established by the Chilean authorities.

The hope is to launch the H2 Magallanes project in 2025, with the aim of producing hydrogen by 2027.