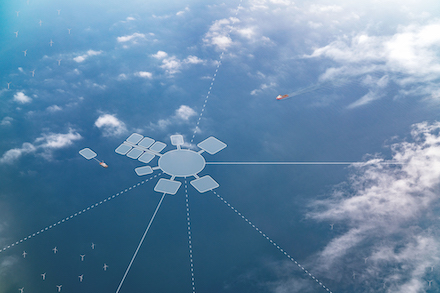 Ørsted + ATP have signed an agreement with leading digital infrastructure and connectivity player GlobalConnect with the aim of making the North Sea Energy Island a “backbone in the future digitisation of northern Europe.” They have also appointed Arup as technical consultant/ lead engineering partner in the consortium developing the concept.

Denmark plans to build the energy island to link offshore wind farms in the vicinity, as well as countries, in a network. Ørsted + ATP say they will support Denmark in realising this vision by building an energy island that can continuously respond to changing needs and which leaves a minimum footprint in the North Sea, so that the marine environment is protected.

Ørsted + ATP say they want the North Sea Energy Island to be “more than just an island.” They aim to “draw upon a ground-breaking modular design to become a future-proof and innovative piece of Danish infrastructure at the centre of the world’s largest offshore network of green energy.”

The aim of the agreement with GlobalConnect is to make the North Sea Energy Island a “cross-border digital hub” and “this is expected to be a major opportunity to deliver on the future digitisation agenda of Northern Europe and a key enabler to potentially attract large-scale investments in digital infrastructure, including data centres.”

GlobalConnect has the most extensive high-capacity data network in Northern Europe with more than 100 000 km of fibre across the region. Data consumption is expected to rise significantly in the coming years, as more devices connect to the internet. This will require a capacity expansion of the grid transporting data between the North Sea countries, and a smart North Sea Energy Island “offers a natural intersection for this grid, while also being a reliable source of renewable energy to power the digitisation.”

Furthermore, the North Sea Energy Island’s proponents argue, by making the proposed island a digital hub, Denmark will be centrally placed to attract investments in two of the most significant long-term growth industries globally: renewable energy; and digital infrastructure.

In recent years, the Nordic countries have become home to some of the world’s largest tech companies. Building high-capacity and secure digital infrastructure across Nordic and European countries is “key to meeting the demands of the tech giants, as well as society’s growing need for robust internet connections.”

With the GlobalConnect agreement, Ørsted + ATP say they are paving the way to attract large operators. The proximity to large-scale emission-free energy and GlobalConnect’s secure and resilient digital backbone could attract significant investments in the North Sea Energy Island and, consequently, to Denmark, they believe.

In addition, the smart energy island will become a central feature in the next phases of offshore wind build-out in the region by enabling for example autonomous operations and further digitalisation of offshore wind.

Ørsted + ATP say they are partnering with Arup on the North Sea Energy Island to leverage that company’s “extensive experience in delivering transformational infrastructure projects in Denmark and offshore wind projects worldwide.” Arup, they point out, has “led other nation-shaping projects across Denmark”, including the Øresund bridge, the Fehmarnbelt Fixed Link, and the new Cityringen Metro in Copenhagen.

“Bold engineering has an essential role to play in the transition towards a more sustainable future”, says Christian Allison, director and Copenhagen office leader at Arup. “For some time, Arup has been supporting Ørsted + ATP in creating a vision for a viable artificial island that will drive positive change.”