Since its introduction in 2014, GE’s HA gas turbine has achieved sales of some 137 units. The latest version is the 7HA.03, the first of which have just started commercial operation. 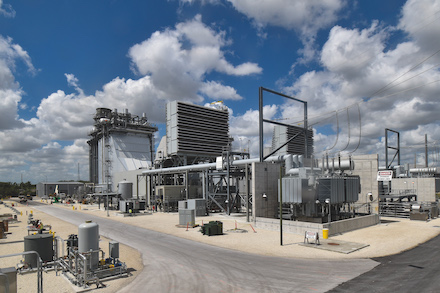 In June, GE and Florida Power & Light Company (FPL) celebrated the start of commercial operation of the first GE 7HA.03 gas turbines, at FPL’s Dania Beach Clean Energy Center, near Fort Lauderdale, Florida. According to GE, the 7HA.03 is “the largest, most efficient, and flexible 60 Hz gas turbine currently in operation globally.”

“FPL has worked for more than two decades to systematically modernise our fleet of power plants by tearing down aging, inefficient plants and replacing them with ultra-efficient, clean energy centres like the one in Dania Beach,” said FPL Chairman and CEO Eric Silagy. These produce “around-the-clock power”, the company notes, enabling FPL to continue its rapid solar expansion, which is the largest in the United States.

Looking ahead, FPL says it believes that, with some modifications, its natural gas units – like the ones at Dania Beach – may be fueled with hydrogen instead of by natural gas and is currently developing a pilot project that will trial the use of green hydrogen to replace a portion of the natural gas at its power plant in Okeechobee County, Florida, which also uses GE technology.

GE says the 7HA.03 gas turbine has the capability to burn up to 50% by volume of hydrogen blended with natural gas. This capability is enabled by the DLN 2.6e combustion system deployed on the 7HA.03 units, as installed at Dania Beach. GE says it has developed a technology roadmap that envisages 100% hydrogen with that combustion platform over the next decade.

The performance of the 7HA.03 gas turbine – more than 64% net combined-cycle efficiency, 75 MW per minute ramp rate, and enhanced flexibility – were validated at GE’s Test Stand 7 in Greenville, SC, USA, which GE describes as “the largest and most comprehensive full-speed, full-load gas turbine test facility in the world.”

Testing of the 7HA.03 in Greenville was executed in parallel with the installation of the two gas turbines at Dania Beach, with immediate benefits for the on-site team from the rigorous testing and learning programs.

GE validated the turbine control system settings and provided the adjustments to system software for improved turbine operability and reliability. In addition, factory testing of GE’s 7HA.03 gas turbine helped to validate the proposition that it currently provides the lowest cost conversion of gas to electricity for 60 Hz grids.

Construction of the 7HA.03 based power plant benefits from a high degree of modularisation, GE notes, resulting in better plant economics and shorter installation time – approximately eight weeks less than for a GE F class turbine.

GE’s says its HA gas turbine fleet (in operation, under construction, ordered) now numbers 137 units, with more than 50 customers across 20 countries. As of May 2022, there were 69 HA gas turbines in commercial operation, with a total installed capacity of 36 GW, and these machines have accumulated over 1.3 million operating hours of commercial experience.

Among recent notable HA orders was that for a 9HA.02 from Energa (part of the Orlen Group) for the Ostroleka C combined cycle power plant in north east Poland. This will play a strategic role in supporting the acceleration of renewable energy growth by enhancing the reliability and stability of the grid, challenged by grid limitations in the northeastern part of the Polish power system, says GE. It is GE’s second H class gas turbine order in Poland, after Dolna Odra, currently under construction.

“In this decade we expect growth in electricity demand and phase out of the oldest coal fired power plants,” said Daniel Obajtek, CEO of PKN Orlen and acting CEO of Energa SA. “Therefore, Orlen Group invests in...power plants with the ability to supplement renewable energy sources”.

“Once in operation and supplied with gas from the Poland–Lithuania interconnector, Ostroleka will contribute to increasing the security of power supply in the country”, said Amit Kulkarni, head of product management for heavy duty gas turbines, GE Gas Power.

Two 7HA.02 gas turbines recently entering service were those at the Indeck Niles Energy Center, Niles, Michigan. On 1 July, Indeck Energy Services, along with its Korean partners KOSPO and DL Energy, officially notified the PJM Interconnection of the start of commercial operation of the new power plant.

Indeck says it developed the project to meet the need for generating capacity created by the decommissioning of older, more costly and/or less-efficient coal fired and nuclear plants in the region.