Germany has been late to recognise the energy security benefits of liquefied natural gas but is now making up for lost time. The country’s first LNG import terminal is under construction. 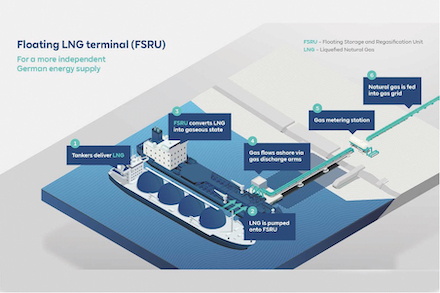 The official construction start date for Germany’s first LNG terminal – an FSRU (floating storage and regasification unit) based facility in Wilhelmshaven – was 4 July, following approval for an early start by the Oldenburg state trade supervisory authority.

Up to 7.5 billion cubic meters (bcm) of natural gas per year (about 8.5% of Germany’s current annual gas demand) will be handled via this terminal, which is being constructed as a matter of urgency and is benefitting from new German legislation designed to speed up the process of building LNG import facilities. The German Federal Ministry for Economic Affairs and Climate Protection and Uniper say they are aiming for commissioning in winter 2022/2023.

“We are very pleased that things are now visibly getting underway”, said Lower Saxony’s minister for the environment, energy, building and climate protection, Olaf Lies. “We need a replacement for Russian gas as quickly as possible, and we in the north are prepared to take responsibility for this...Here in Wilhelmshaven, we are currently demonstrating what the new German speed means: we are planning, approving and building at eight times the normal speed. With such complex projects, this is only possible if everyone pulls in the same direction. Our thanks must therefore go in particular to the employees of the approval authorities.”

Klaus-Dieter Maubach, CEO of Uniper added: “The rapid approval for the early start of construction shows the importance of the LNG terminal in Wilhelmshaven for the country’s security of supply. This cannot be taken for granted – above all, it shows what is possible when society, industry and politics pull together.”

Uniper submitted the application for the required permit and for approval of an early start under the German federal emissions control act (BImSchG) to the Oldenburg state trade inspectorate at the beginning of June. This relates to the inland and seaward infrastructure as well as a 28 km long high- pressure gas pipeline between the FSRU and the transfer point into the natural gas pipeline network of Open Grid Europe (OGE). The full BImSchG application was due to be completed by the beginning of September 2022.

The terminal is being built at the existing Umschlagsanlage Voslapper Groden (UVG) transhipment facility.

Uniper is building and will operate the terminal at the request of the German federal government.

The existing UVG has to be adapted and a connection between the FSRU and the onshore facilities established (the “ship-to-shore interface”). The adaptation of the UVG is being carried out by Niedersachsen Ports (NPorts) in close co-operation with Uniper.

In a second phase of the project, a permanent and expanded port for the FSRU is to be constructed, in parallel with the existing UVG. This will include additional unloading and handling facilities for green gases, eg, ammonia – part of the Green Wilhelmshaven initiative.

According to Uniper, the Wilhelmshaven site offers “ideal conditions from both a maritime and logistical perspective” with “LNG tankers of all sizes able to call at the facility regardless of the tides and in line with the highest international safety standards.” And all that is required for connection to the existing natural gas network (and to the Etzel natural gas storage facility) is the 28 km pipeline, “the realisation of which has already been started by OGE.”

RWE, meanwhile, is working on providing onshore connection for an FSRU at Brunsbuttel, with the goal of being able to feed first gas into the German gas grid by winter 2022/23. It is also working with Stena Power and LNG Solutions on setting up a floating LNG terminal off Lubmin, in the Baltic Sea, close to the German end of Nord Stream 1.

Uniper and RWE have each chartered two FSRUs on behalf of the German government. The Uniper FSRUs are managed by Dynagas, and RWE’s by Ho¨egh LNG. The capacity of each FSRU is about 7 bcm/y. By comparison, the throughput of a typical land-based LNG terminal is between 8 and 10 billion cubic metres per year.

A fifth German FSRU, due to start up at the beginning of the 2023 heating season, is being implemented by a consortium of Tree Energy Solutions, E.ON and Engie. This will also be located at Wilhelmshaven. Engie is chartering the FSRU from Excelerate Energy.

Other potential sites for German FSRU terminals include Stade (not far from Brunsbuttel) and Rostock (on the Baltic Sea).

It is estimated that there are currently, some 48 FSRUs in operation worldwide.

Land based LNG at Brunsbuttel

In March, KfW (German national development bank acting on behalf of the German federal government), Gasunie (100% owned by the Dutch state), and RWE signed a memorandum of understanding with the aim of developing a joint project to build a land based LNG import terminal at Brunsbuttel. KfW will acquire 50% of the shares in the LNG terminal for the German government. Gasunie will operate the facility.

The plans are at an “advanced stage”, says RWE, with a final investment decision expected soon.

The terminal will have an annual regasification capacity of 8 billion m3.

The intention is to make it possible to refit the terminal in the future so that it can process green hydrogen derivatives such as ammonia. RWE says it intends to build an import terminal for green ammonia in the immediate vicinity of this plant, with green ammonia “due to arrive in Germany and to be distributed to customers from 2026.”