A major player in offshore wind, RWE also sees considerable promise in floating offshore photovoltaics. And as a first step into floating PV it has recently commissioned an installation on a cooling water lake at its Amer power plant site in the Netherlands. 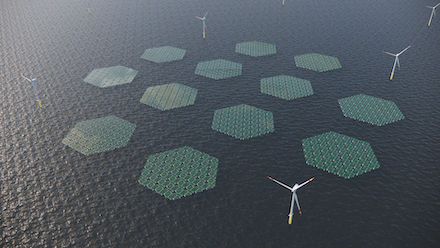 A recent significant development was the signing by RWE and Dutch-Norwegian company SolarDuck of a collaboration agreement on the development and deployment of floating solar parks at sea.

As a first step in the collaboration, RWE is investing in a first offshore pilot in the North Sea. The aim of the pilot is to accelerate the learning curve for SolarDuck’s floating solar technology, and lay the foundation for a larger demonstration project, at the Dutch offshore wind farm Hollandse Kust West (HKW), also in the North Sea, about 53 km from the Dutch west coast.

RWE is tendering for this project, and has included SolarDuck in its bid, with a highly innovative combination of offshore floating solar with integrated storage technology.

The offshore floating PV (OFPV) technology being developed by SolarDuck is said to establish “a new frontier for solar energy” and provides a way to address the problem of increasing scarcity of land for the generation of renewable electricity.

The integration of offshore floating solar into an offshore wind farm is seen as an efficient use of ocean space for power generation (using the space between the wind turbines) and promises synergies in terms of construction and maintenance of a multi-energy-source renewable power plant. The result is “a more balanced production profile due to the complementary nature of wind and solar resources”’ say RWE and SolarDuck.

Taking solar farms offshore requires a technology that is able to withstand rough offshore conditions, including high waves, strong winds and a corrosive environment. SolarDuck’s unique, triangular-shaped platform – which has received the world's first certification for offshore floating solar, by Bureau Veritas – is designed to float several meters above the water, “following the waves like a carpet”, thus “keeping critical electrical components dry, clean and stable, as well as securing the integrity of the semi-submersible structure while enabling safe operations and minimal maintenance.”

SolarDuck’s full-scale offshore pilot, which RWE is investing in, is called Merganser, with a nameplate capacity of 0.5 MWp. It is expected to be installed off the coast of Ostend in the Belgian North Sea in 2023 and will be SolarDuck’s first offshore pilot following the successful deployment of an inland pilot in the Netherlands last year.

Merganser will provide RWE and SolarDuck with “first-hand experience in one of the most challenging offshore environments in the world” and these “learnings will enable a faster commercialisation of the technology from 2023 onwards.”

RWE has submitted bids for both HKW site VI and HKW site VII, with a combined capacity of over 1.4 GW, to contribute to the Dutch government’s ambitious build out target of 21 GW for offshore wind by around 2030. The SolarDuck demo is included in the bid for HKW site VII, which also envisages 600 MW of electrolyser capacity with access to storage capacity in the planned onshore hydrogen backbone.

Sven Utermo¨hlen, CEO, offshore wind, RWE Renewables said : “We are very keen to further explore the potential of offshore floating solar together with our partner SolarDuck. For countries with lower mean wind speeds but high solar irradiation, this opens up attractive opportunities.”

“Showcasing SolarDuck’s robust technology in rough North Sea conditions will enable us to deploy the technology practically anywhere in the world”, said the company’s CEO Koen Burgers. “We are very pleased that we found in RWE a strong partner who shares our vision of electrifying the world with offshore floating solar. I look forward to our organisations working together to achieve just that.”

Building on experience with Merganser and HKW, RWE and SolarDuck say they plan to explore new opportunities, with the objective of developing “commercial offshore floating solar parks, both stand-alone and hybrid.”

SolarDuck is a Dutch-Norwegian offshore floating PV specialist with strong roots in the maritime industry. The company was established following a spin-off from Damen Shipyards (the largest shipbuilder in the Netherlands). Since then SolarDuck says it has “worked relentlessly... to ‘Electrify the world with OFPV’” and believes its technology “offers an attractive value proposition in a wide array of user cases, ranging from islands in the sunbelt to hybrid offshore parks in the North Sea, including the Netherlands.”

RWE has 18 offshore wind farms in operation. Construction projects include Sofia (1.4 GW off the UK coast) and Kaskasi (342 MW off the German coast), while it has more than 10 GW of offshore wind farms under development. It sees the Netherlands as one of the key markets where it aims to further expand its renewable energy portfolio. RWE currently operates seven onshore wind farms there, with a total installed capacity of over 330 MW (RWE’s pro-rata share), with new ones under development and construction.

RWE has also recently commissioned its first floating PV installation, on a lake at its Amer power plant in Geertruidenberg, in the province of Noord-Brabant. in the Netherlands.

“Our Amer floating photovoltaic project is the first of its kind for RWE, adding a new, promising technology to our portfolio”, said Katja Wu¨nschel, CEO onshore wind and solar Europe & Australia, RWE Renewables. “Realising and operating this project deepens our knowledge about the technical possibilities of floating PV, such as scalability and energy output.”

The Amer project consists of around 13 400 floating solar panels, providing an installed capacity of 6.1 MWp.

The floating PV is the latest of three solar installations at the Amer power plant. In 2018, RWE realised the first phase of Solar Park Amer, installing over 2000 PV panels with a generating capacity of 0.5 MWp on the roof of the power plant. In 2021, RWE further increased the solar capacity with the addition of ground-mounted PV, some 5760 panels. With the commissioning of the floating project, the total generating capacity of Solar Park Amer stands at 9 MWp.

Roger Miesen, CEO of RWE Generation and country chair for the Netherlands said: ”With Solar Park Amer we demonstrate that it is possible to turn conventional asset sites into landmark projects that promote innovative solutions for a sustainable electricity system.

The solar panels float on a lake previously used for power plant cooling water. The lake has not been used for that purpose for many decades and has no direct connection with the nearby Amer river, and is therefore ideally suited for floating panels, says RWE. To prevent the panels from drifting away in strong winds and colliding with the surrounding dike, they are anchored at 104 points to 52 concrete blocks, each weighing 4.6 t, placed at the bottom of the lake.

Visualisation of the SolarDuck concept
Floating PV at RWE’s Amer power plant in the Netherlands
Post to: