Swedish start-up Hexicon reports progress with the development of its floating wind concept, which envisages two turbines per platform mounted on tilting towers. 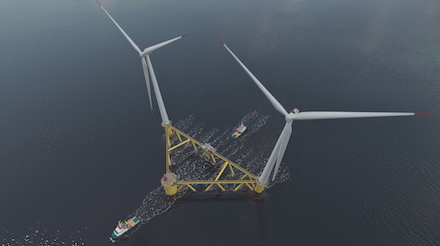 The 1.3 GW MunmuBaram project off the south-east coast of South Korea, 65-80 km from Ulsan, water depth 120-150 km, expected load factor 40%, is one of the biggest planned floating wind farms in the world. It is “set to play a significant role in the global development of commercial scale floating wind” says Hexicon – Stockholm-based developer of the TwinWind two-turbine floating wind foundation – which has increased its direct ownership stake in the project.

Formally established in 2019, MunmuBaram indeed has ambitions to be the world’s “first large-scale floating wind project.”

Hexicon Korea, a JV between Hexicon and Korean company COENS & Co, in which Hexicon holds 49%, held 20% of MunmuBaram – corresponding to an indirect ownership for Hexicon of just below 10% before the recent transaction. Post transaction, Hexicon holds 20% of the project company, with the remaining 80% owned by Shell Overseas Investments.

Hexicon’s TwinWind concept consists of two full size turbines mounted on two tilting towers placed on a single floating foundation, free to rotate round a single mooring point. The aim is to enable more power to be generated in a given sea area, increasing the power density, reducing the number of platforms and cabling needed for a given power output, and lowering environmental impacts.

Another recent significant development for Hexicon and TwinWind was the success of its TwinHub demonstrator project in the Celtic Sea in Allocation Round 4 of the UK’s Contracts for Difference scheme (the UK government’s main mechanism for supporting low carbon power generation technologies). It is the first ever dedicated CfD award for floating wind in the UK.

Seen as a “major stepping stone project” for Hexicon’s TwinWind technology, the 32 MW TwinHub floating offshore wind facility has secured 15 years of CfD revenue support from the UK government under the scheme, at a strike price of £87.30/MWh (2012 real prices, delivery year 2026/27), “taking the project a significant step closer to completion.”

Hexicon believes the TwinHub project, which is supported by a team from Bechtel, will help kick start the floating wind sector in the south west of the UK and pave the way for larger scale commercial projects in the Celtic Sea, utilising TwinWind and other floating technologies, contributing towards the UK government’s target of 5 GW of floating offshore wind by 2030.

TwinHub will be deployed within the Wave Hub renewable test site, approximately 16 miles off the coast of Hayle in Cornwall, UK. It will connect to an existing subsea cable which runs from the site to an onshore substation in Hayle, making full use of the legacy infrastructure on the site.

The offshore site will host two TwinWind floating offshore wind platforms, each with two turbines. Water depth ranges from 50 to 60 m and the platforms will be anchored to the seabed with a single point mooring using a catenary anchor system.

In July 2021, Hexicon completed its acquisition of the Wave Hub test site from local authority, Cornwall Council, through its UK subsidiary TwinHub Ltd. Assets included: a 30 MW grid-connection (expandable to 40 MW); a four-way seabed hub; 16 km offshore and four inter array cables; an onshore substation and related land; a consent over eight square kilometres of sea; and a 25-year seabed lease option from the Crown Estate.

The TwinHub demonstrator received Section 36 consent in 2020 and was awarded a marine licence in January 2022.

Menwhile, the first deployment of a full-scale TwinWind platform is planned for the METCentre deep water test site off the coast of Norway.

With a water depth of 200 m, favourable seabed conditions, shallow gradient, and excellent wind resource, the METCentre site is considered an optimum location for this pilot proof of principle project, called TwinWay, a key milestone in scaling the patented TwinWind concept.

During the initial phase of the project Hexicon has received a statement of feasibility and certification report from DNV.

Marcus Thor, CEO of Hexicon said: “After years of development, numerical analyses and physical model testing, we are now putting the final pieces in place to deploy the full-scale version of our patented design...Worley is a well renowned tier one contractor in the renewable sector, and I’m thrilled that their deep competence and infrastructure will be engaged as TwinWind becomes a reality.”

The 5-year long co-operation consists of two phases, covering the provision of advanced expertise during both the pre-development and the development phases of projects. Work began in June 2022.

Integrating the power produced by “conventional” offshore wind farms into the onshore electricity grid is becoming increasingly challenging, notes Hexicon, and “due to the technical complexities of floating offshore wind, this applies even more.”

In solving the technical challenges related to grid connection of floating offshore projects, EGI and Hexicon say they want to turn floating offshore wind into an attractive proposition for investors, “allowing the industry to venture further into deeper waters and benefit from much stronger winds to generate more power”, with “potential geographies for the co-operation including the Mediterranean as well as the Baltic and Atlantic Sea basins.”

In line with the country’s overall economic recovery strategy, Greece now seeks to promote renewables, including offshore wind parks, to reduce its traditional reliance on fossil fuels. The government has made green energy one of its top priorities and has implemented a new national plan setting some of the most ambitious goals in the EU, such as generating 60% of its electricity mix from renewables by 2030.

The JV is said to be in line with Hexicon’s strategy to be an early-stage developer in key markets globally, where the company teams up with local partners.

Another example of this is Italy, where Hexicon has created a 50-50 joint venture with Avapa Energy, called AvenHexicon – with the aim of developing floating wind power projects in Italian waters. In addition, Hexicon will license its patented TwinWind technology to AvenHexicon for use in its projects and by third parties. Hexicon sees Italy as a key market in Europe for floating wind power.

Based in Bologna, Avapa Energy has many years of experience of developing solar and wind parks on land and is said to have “the know-how and local knowledge that match Hexicon’s profile in floating wind power.”

A priority for AvenHexicon is to identify suitable sites for floating wind power parks Italy in order to initiate the necessary permit processes as soon as possible.

At first glance the TwinWind concept looks similar to other two-turbine floating wind concepts proposed over the years, but the European Patent Office (EPO) has confirmed its intention to grant Hexicon a European patent for the company’s floating wind power platform with two tilted towers. According to Hexicon, EPO also examined a third-party submission, similar to the objection filed against the patent already granted in Sweden, and “did not find it relevant.” The patent has previously been granted in South Africa as well as Sweden and South Africa.

In June 2021, an objection to the granted patent in Sweden was submitted to the Swedish intellectual property office (PRV). This was described in an additional prospectus prior to Hexicon’s listing on Nasdaq First North Growth Market. After consultation with the company’s patent attorney and “in the light of the fact that the objection essentially referred to already known documentation”, an assessment was made that “the objection would not be successful.”